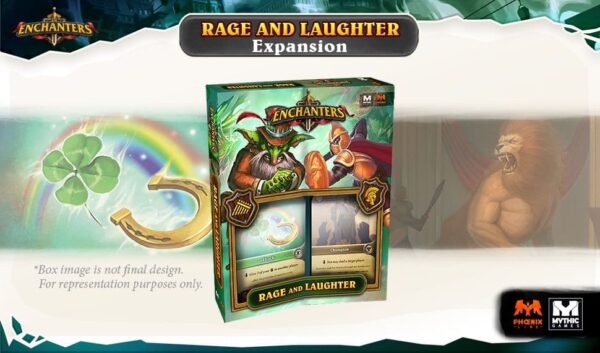 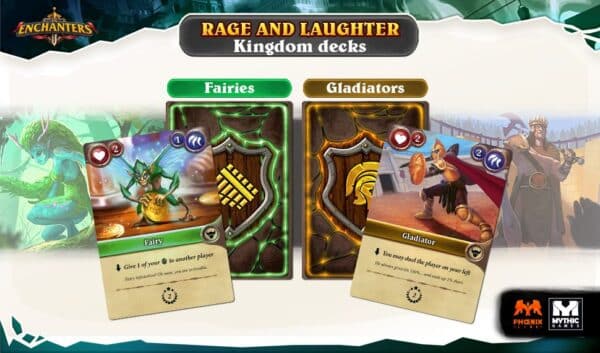 This is an expansion of the game requires Enchanters: Core Box to play. These decks are included in the Ultimate Box.
Estimated Production: Q4 2021
Estimated Delivery: Q1 2022

Mischief? Laughter? That’s what fairies bring to the kingdom; a merry chaos that can topple giants. They are a gift that keeps on giving… even if you may have to offer your crystals, items and monster trophies to other players! On their side, Barbarians provide Enchanters the means for (friendly) slaughter. Duel against opponents and wound them, or strategically turtle up to fend off their attacks!

This expansion is the second of the dual kingdom deck expansions to go to retail! Add Barbarians and Fairies to your kingdoms! Pure brute strength and funny little trickster creatures are now your allies!

Gladiators: Enchanters enter full PvP battle royal mode. Fight other players to become the champion of the arena. Dueling other players might be a way to victory. Ramp up your attack to deal them massive wounds or gather your defenses to shrug off attacks from other players

Fairies: Fairies just want to have fun. And their idea of fun is basically giving your stuff to other players. The Fairies Deck will make you give your Crystals, Items, and Monsters To other players. Plan strategically and this can be a great benefit!