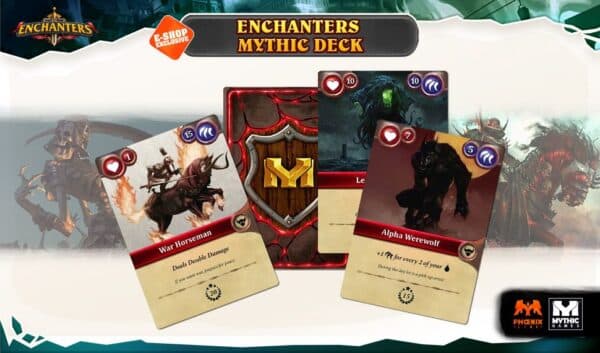 This is the KS version of Enchanters: Mythic Deck promo! This is a promo and you need the basic box (retail edition) to play. This product is not available in retail and you can find it exclusively on our e-shop and conventions.

Mythic Threat is a promotional and optional deck, containing 24 incredibly powerful Monsters pulled into the Enchantia from other realities as universes collide at the end of time. At the beginning of the game, you randomly draw one card per player from the Mythic Deck, you show those cards to players so that they understand the coming challenge then shuffle them together and put them at the bottom of the Adventure deck. These Monsters are Mega tough, hard to beat but when you do – the Glory Point rewards are massive.

Defeat – or be defeated! There is but one way!