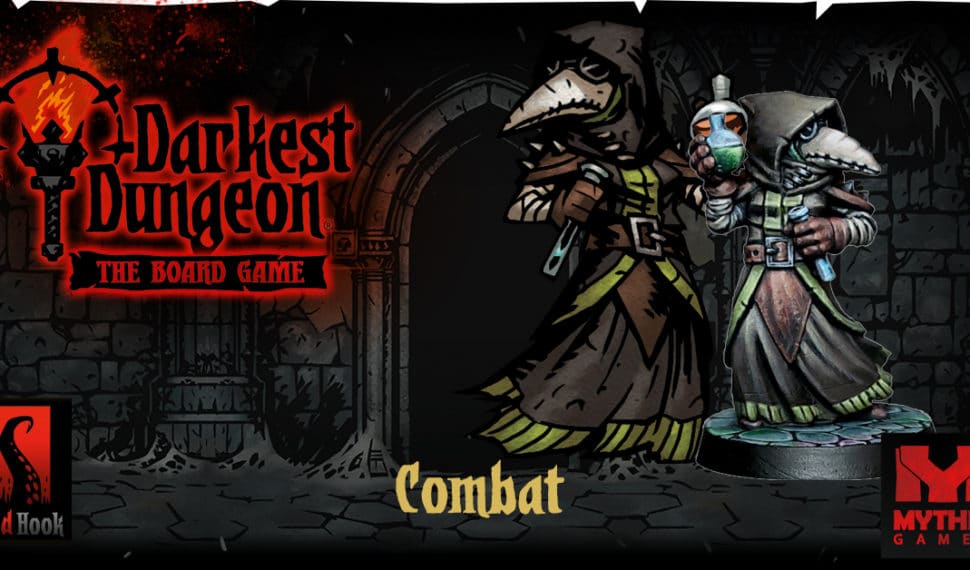 It’s time to provide you with some additional exciting news about our upcoming game Darkest Dungeon: The Board Game, which you can find very soon on Kickstarter! Welcome to this fourth article!

So far, we’ve shared information about the heroes and the order and stance they will choose when questing and exploring in the dark recesses of the treacherous dungeon. Venturing off into the unknown to brave the dark corridors and hidden chambers can be a harsh and unsettling experience. Yet it pales in comparison to the frightening moment when you open that chamber door to find yourself facing a team of horrific monsters! What do you do then? What are our heroes expected to do? Can their powers and training do them justice, or will they perish at the hands of this unruly mob of monsters?

Let’s take things from the start. 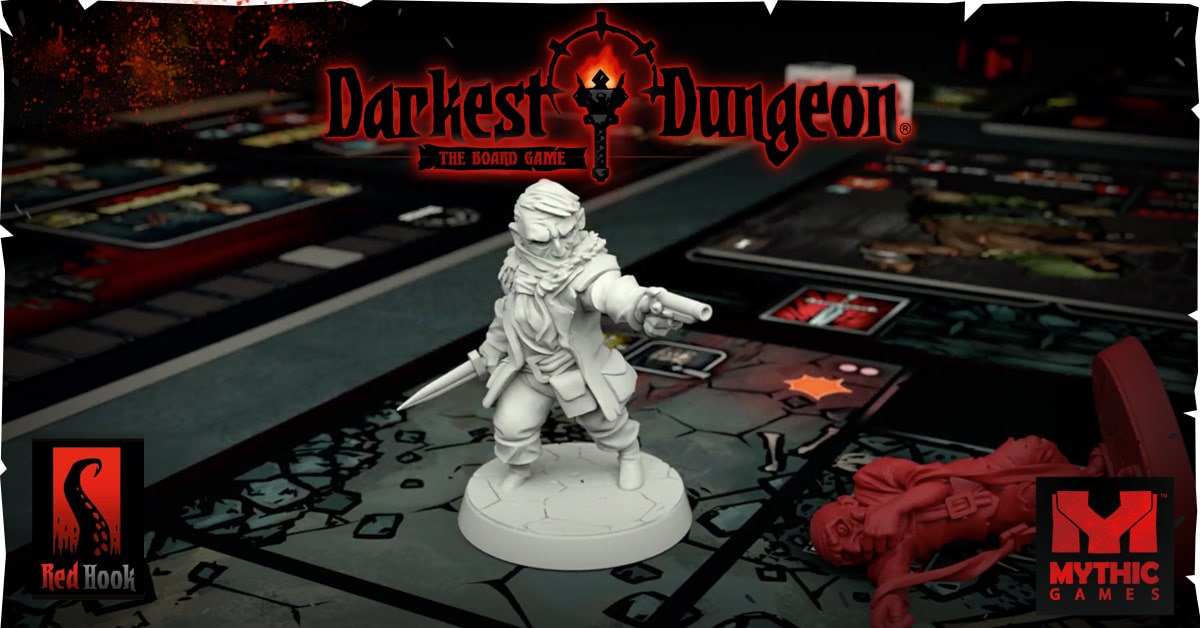 As your party opens the chamber’s door, you reveal a room card. The corresponding room tile is then placed prominently on the table and your heroes enter the room – each one on their own space according to the icon that matches their current stance. The monsters are likewise placed in the room, as monster cards are revealed one by one, populating the room with their unholy presence. Expect to be surprised, though, as the monsters vary in both potency and size and they have no qualms in banding up in any way they see fit, to ensure your party’s demise. Bandits, abominations and hulking skeletons join the teeming masses that populate well-adorned rooms that house a variety of mysteries and treasures!

And then, combat begins as heroes clash against monsters with a violent vigor! As initiative cards are drawn, heroes and monsters get activated to perform actions and attacks against each other. A hero can perform a couple of actions during their activation, like moving, interacting, changing stance or using a skill whereas a monster is expected to take actions depending on its stance and behavior as shown on their card.

Moving is crucial to all, as both heroes and monsters rely on proximity in order to perform their attacks and various skills. Ranged attacks need some distance, and other sweeping attacks can target more than a single enemy next to the hero performing them. Additionally, corridors and fissures can become strategic chokepoints for either side to exploit. As everything relies on both the hero’s and monster’s combat training, both sides understand that positioning is vital and can shift the balance of the combat in an instant. 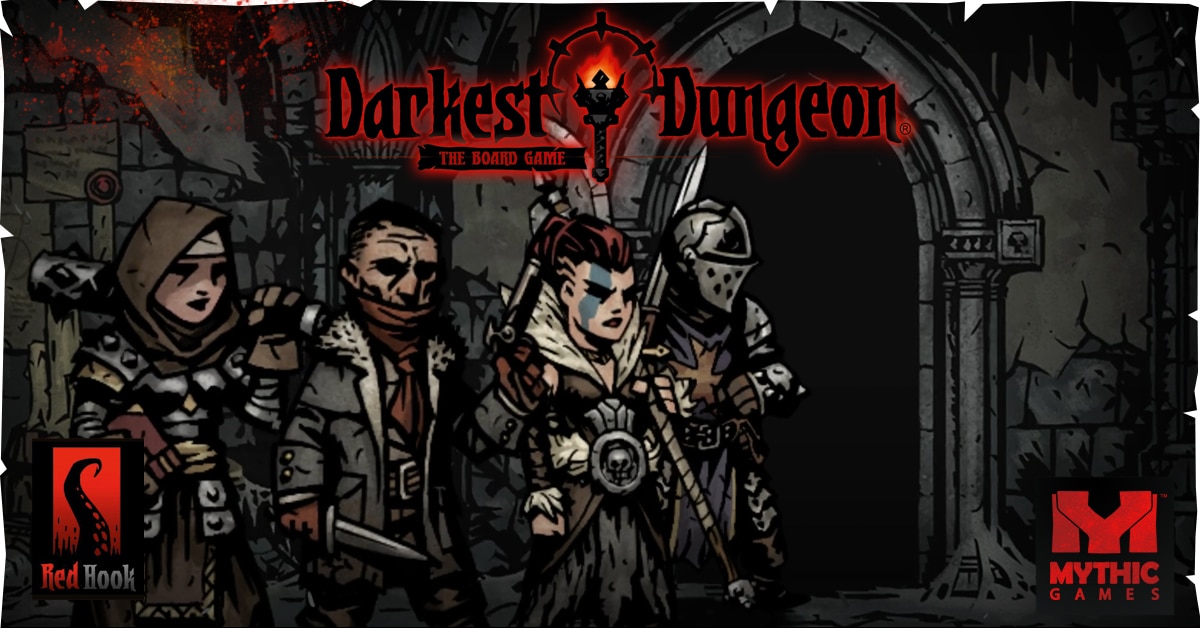 Interacting is an entirely different thing from using a skill, as this action allows a hero to interact with different elements within the room’s environment. From activating switches to sanctifying relics and opening treasure chests, the heroes will never abandon their quest even in the midst of the most precarious of fights, lest they risk not only their lives but their noble mission as well. 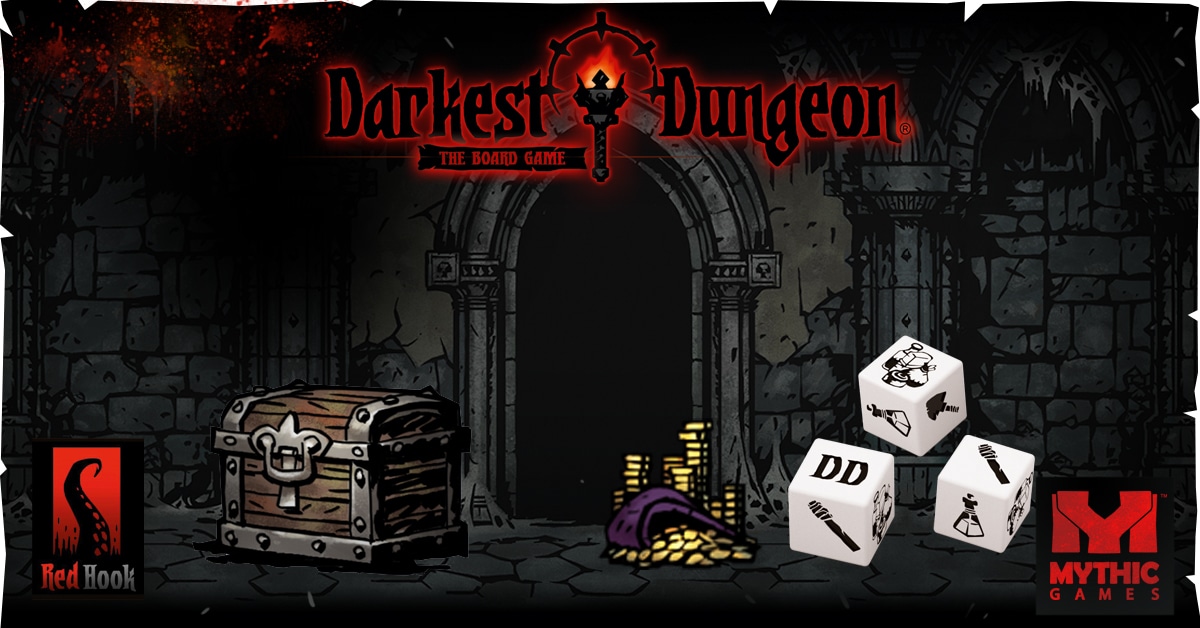 Stance changing represents how a well-trained hero will act and react in combat, so understanding how your hero can best utilize its abilities is paramount. Your position on the map is an important consideration when determining what stance your hero will adopt. A hero’s stance demonstrates the character’s fighting tactics and should coordinate with those of their teammates. An aggressive Crusader is expected to take the brunt of the damage in a fight even when standing with his back against the wall. And a supportive Arbalest will stand still in the room’s shadows to carefully snipe her next target. Given their experience, however, a hero will adopt a different stance by switching their position on the stance track, enabling them to use different skills as the need arises. 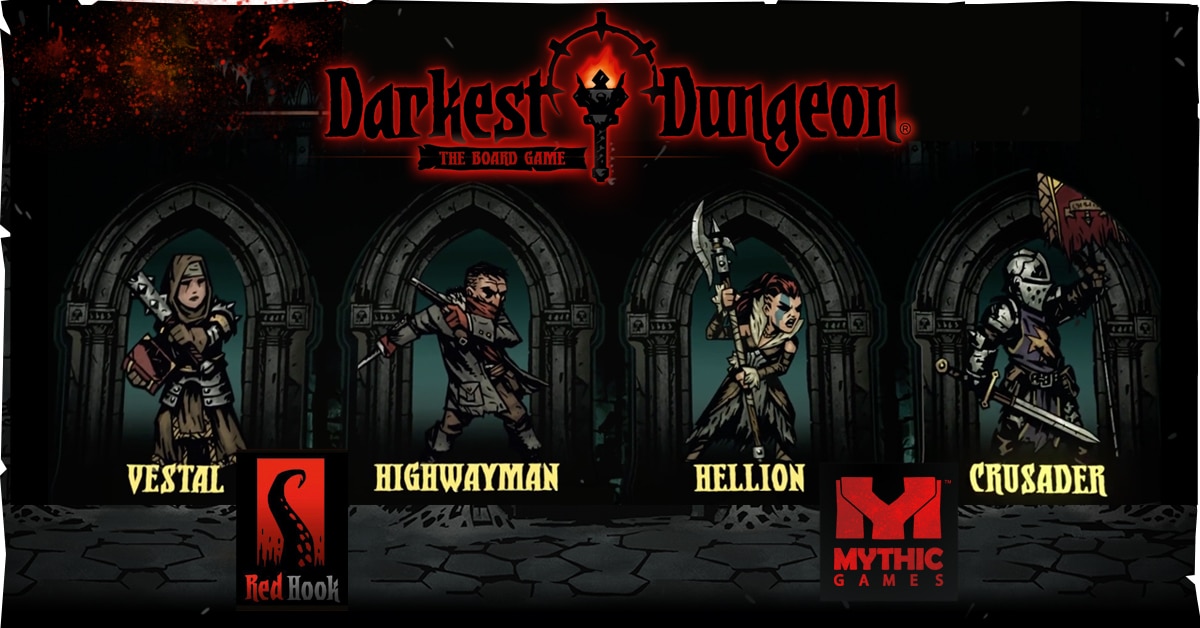 Skill usage is the most important thing in combat, as doing so allows both heroes and monsters to initiate attacks against each other or perform various techniques to assist their team in combat. Swinging swords, backstabbing and invoking healing powers are all part of using a skill and are strongly tied to the character’s position in the room and on the Stance track. 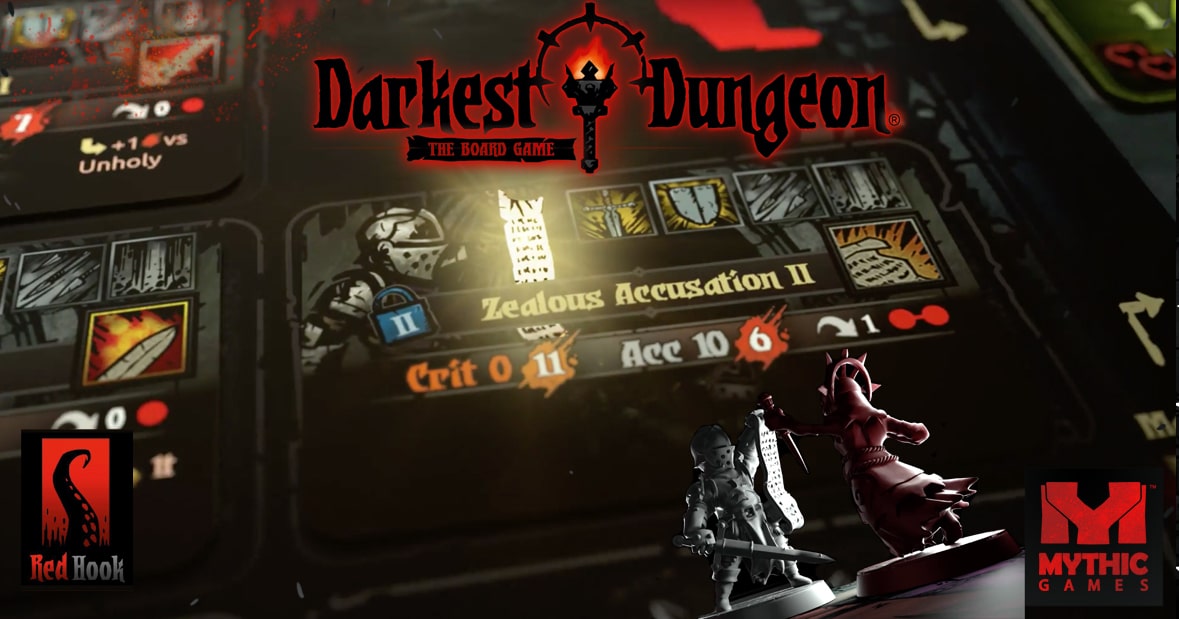 Following the initiative cards that are drawn, heroes and monsters are activated alike, as rounds pass until only one side emerges victorious. The ominous nature of the dungeon is yet one more thing to take into account, as it makes the torchlight go dimmer and more darkness favors the monsters. But as soon as four rounds pass, the heroes, having lost precious time, will be forced to retreat and exit the room. While the heroes take some time to recuperate the monsters will have time to call for reinforcements, and they’ll once again have to face a full cadre of monsters to battle upon their return.

Combat is not a light affair, as it is considered the crux of the party’s success in its quest. A well-trained but poorly equipped party can be doomed to fail, especially when facing monsters of a specific type. Some of them inflict grievous poisons, where others work well in teams, and still others even rely on party members being on a specific space altogether! So, keep this in mind and press the advantage! Give them no quarter!

Prepare, persist and overcome – the Ancestor

These are the main points of combat and the heroes should expect to be engaged in combat more often than not, against various types of enemies for many different quests and adventures. And no matter how many times they emerge victorious they will do so wounded and battered. But enduring the battles affords them the chance to heal their wounds and push on; for while it may be a small victory, it is a victory nonetheless! 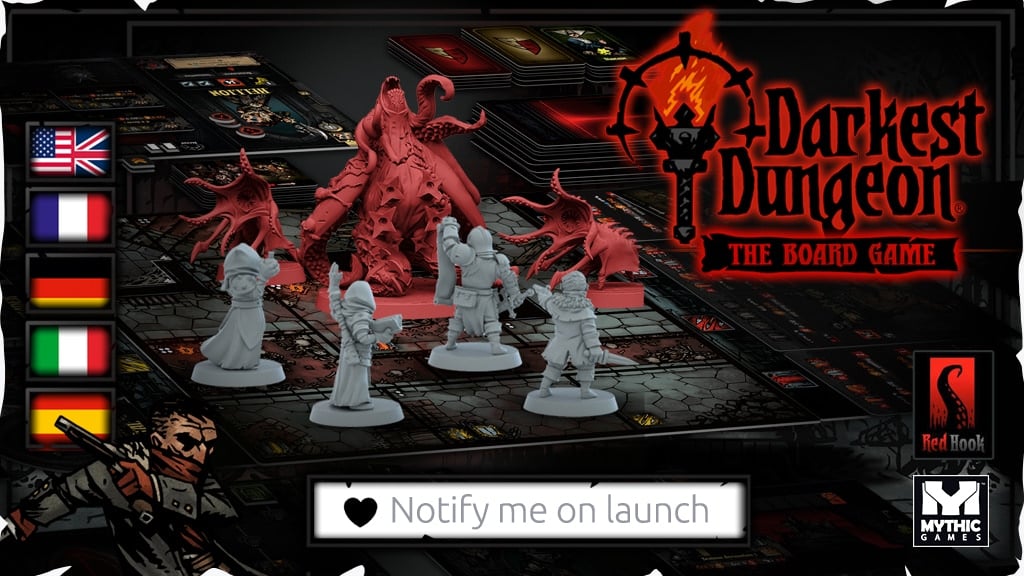 Launching October 20th on Kickstarter ! Click on the Image above to be notified on launch!

Darkest Dungeon: The Board Game – Heroes and Stances

Darkest Dungeon: The Board Game – The Quest Begins!

EXPOSED: Creating a board game collection 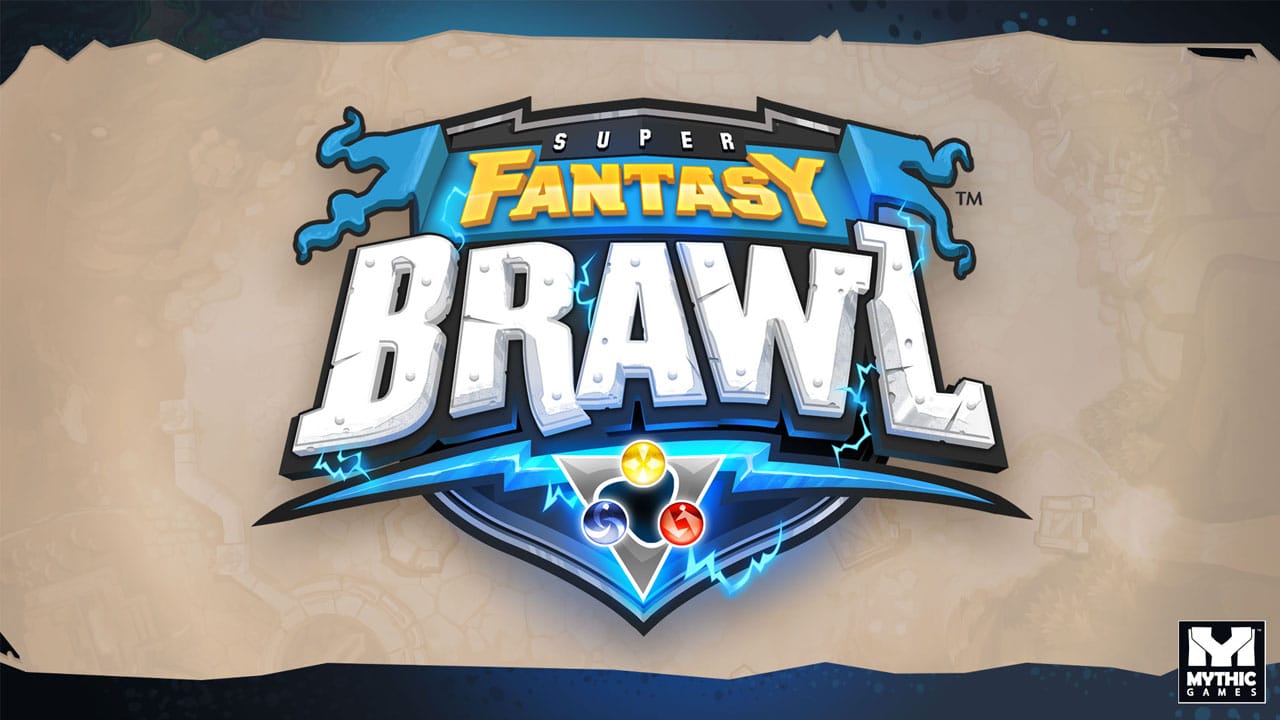