Who would the Heroes of Golden Axe be without Death Adder? The Fellowship of the Ring without Sauron? Slaine without the Drune Lords? A Heroes value is measured by the ferocity of their opponents. But before facing off the end- level bosses, the Heroes of the Companions of the Spear will also have to face simple minions. Those who, by their repeated actions, will weaken the Heroes before dying anonymously under Konrad blades.

Let’s check out how these lesser enemies function during gameplay.

An enemy is defined by its type and level, the higher its level (there are three), the more trouble they will give the Heroes of the Companions of the Spear. Note that each region of Alboraan offers a unique set of opponents for the players to battle, for example hordes of “benevolent” Kizzhuls will swarm the Heroes when they cross the Jade Sea. 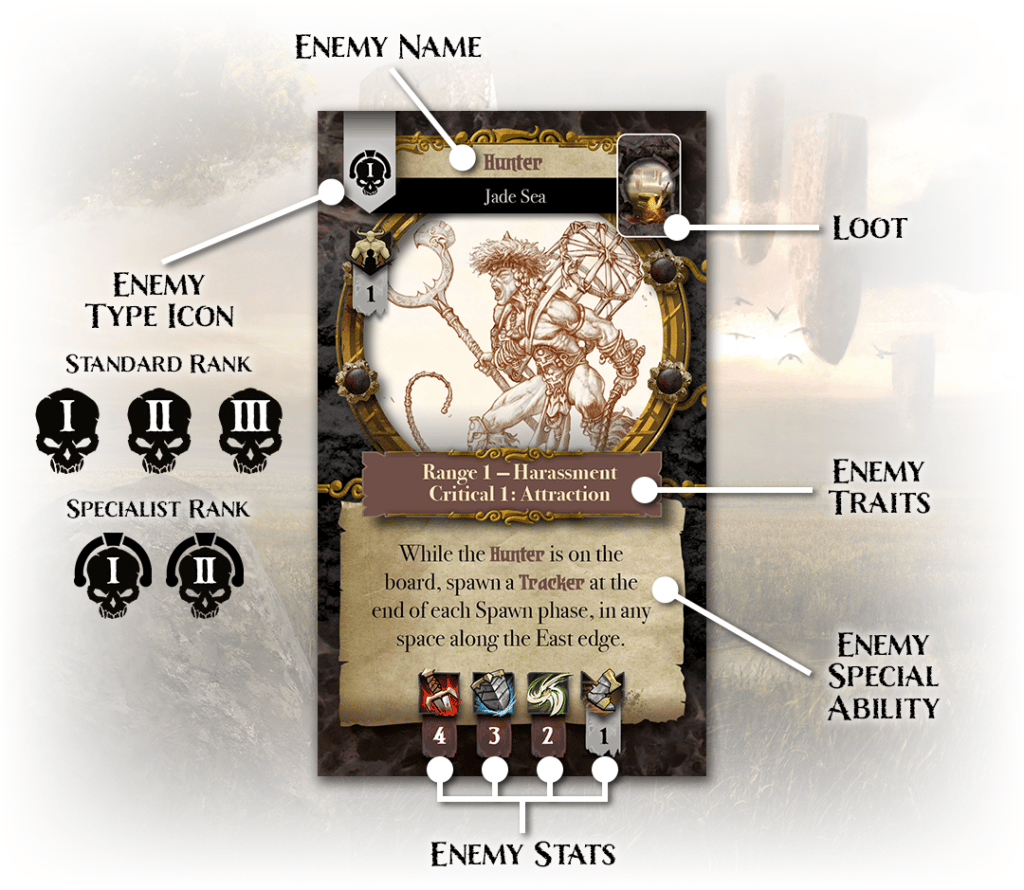 Most of the time, heroes will fight minions, these “minions” act in groups.

A specialist is a more powerful enemy than a minion, they act alone and drops a Loot card for the Hero that eliminates them. 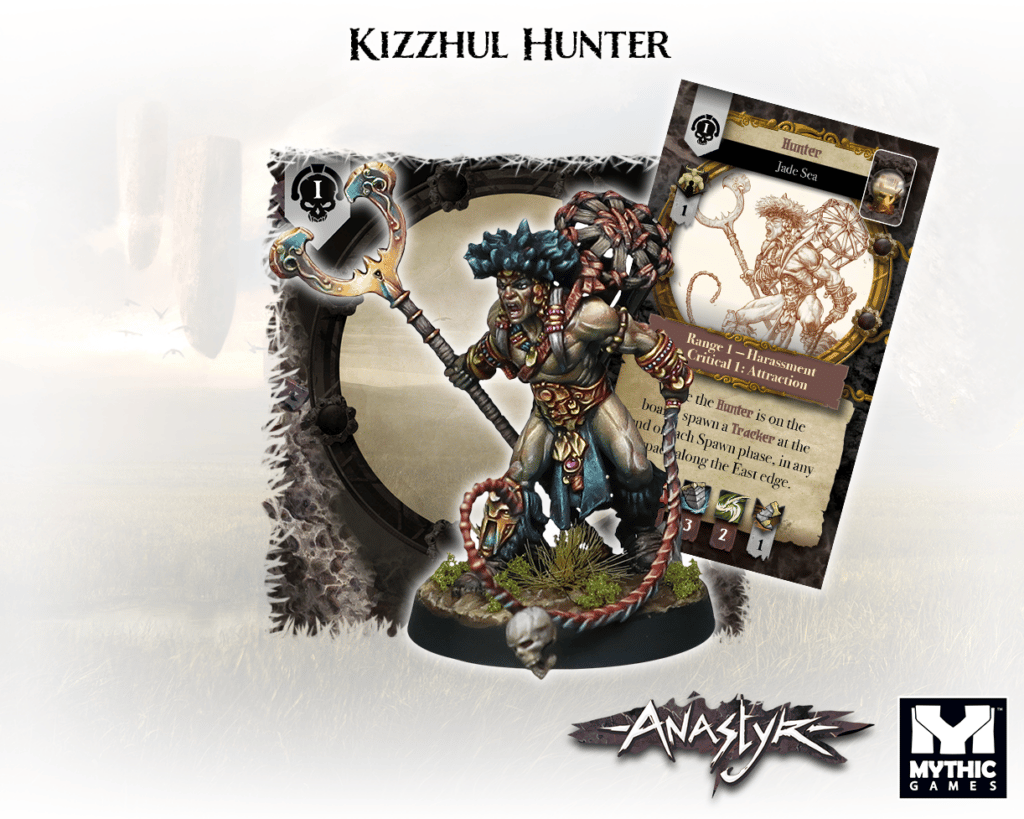 These are a sort of “non categorized” enemy, don’t have a Level. They are formidable and each one acts in a particular way. Thus, you will have to analyze their behavior to have a chance at defeating them. A detailed article about bosses and mini bosses will be published soon.

Adventure set-up determines which enemies the Heroes will face. For example, if the Enemy card of the Kizzhul Trackers is in play, then ten Tracker miniatures are placed in the enemy zone. Sometimes, new enemies will be introduced during the game: in this case, the appropriate miniatures and cards will be added.

Each enemy type has an Activation card in the Activation queue. The position of this card in the queue will determine when it is activated during the turn.

For example, a Level 1 Activation Card will activate all enemies of the same level, first the Level 1 Specialist, then the Level 1 Minions.

Bosses and mini-bosses have multiple Activation Cards, each creating a specific behavior. Heroes will be able to temporarily “deactivate” these cards and thus reduce the number of activations a boss or mini boss has during a turn.

Watch out! They’re coming for us!

Enemies move with those furthest west on the board going first. To make this sequence easier to manage, most movement constraints are ignored.

Each enemy moves first to the nearest Hero’s space, aligning with his target as soon as possible. In case of a tie, the leader will be targeted, and if there is no leader, then the next Hero to activate will be targeted. Taking “aggro” comes with its own risk! A role usually assigned to Tank Class Heroes.

Example: A Slaughterer (CBT 3) attacks Shadu. The player controlling Shadu (DEF 2) will have to roll two dice to try to stop a power 3 attack. Two hits are rolled, which is not enough to avoid the blow!

A Hero loses a number of Health points equal to the difference between the enemy’s attack power and the number of hits obtained on their stat roll. Using our example above, Shadu would lose 1 Health point. Some enemies use magic, in which case the Hero’s ART stat will be used to defend themselves.

Watch OUT!!!, your opponents will exploit the slightest opportunity to outflank you thanks to their numbers! Indeed, the attack power of a group of enemies increases by 1 for each miniature of the same type and level targeting the same Hero. With this principle, only one roll is made by the of the targeted Hero controller (player), which considerably speeds up the enemy activation sequence.

Don’t think you’re safe by grouping all your Heroes in the same space, because a combatant adjacent to an inaccessible space can still target it!

Enemies increase their potential to do harm with different traits and powers. Beware of Trackers when they attack in packs. Note that each Enemy card has an experienced version that can be used for four-player games or if you want to ramp up the difficulty mode. 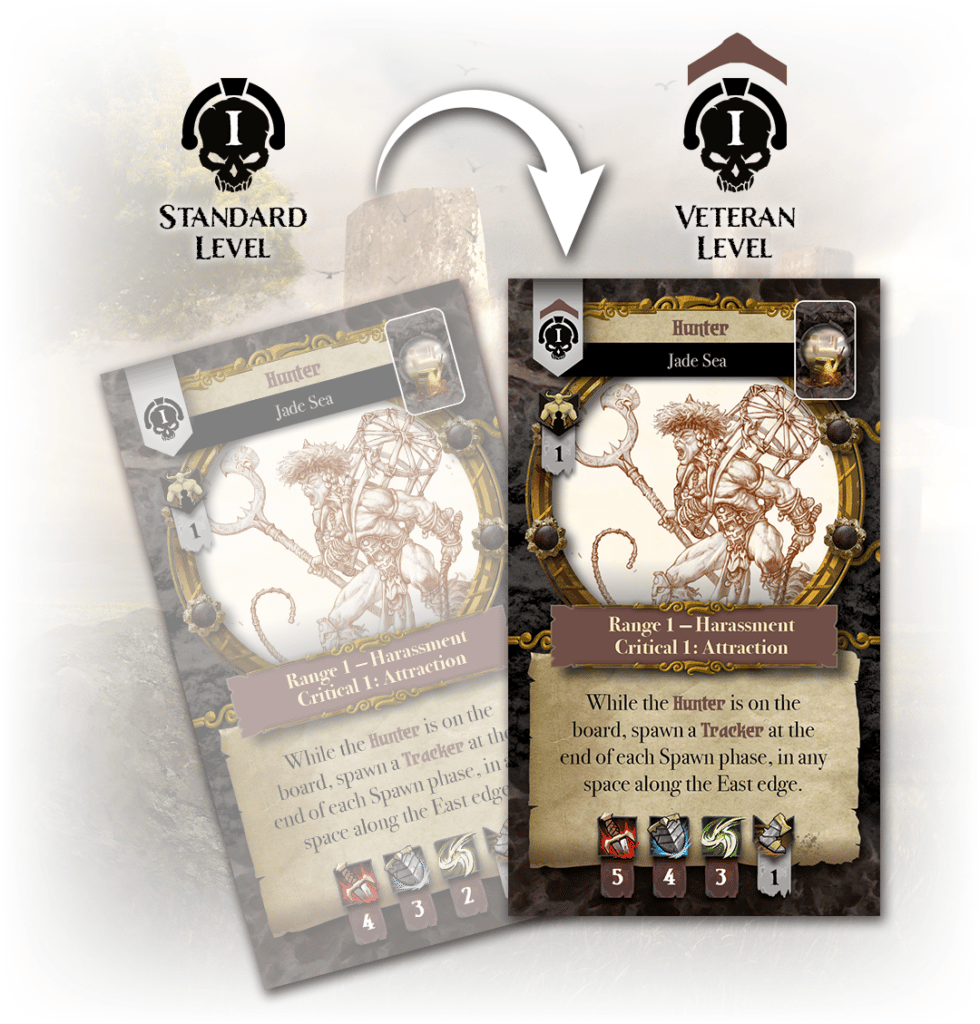 An Enemy Tracker card veteran side

At the end of the activation phase, is the enemy Spawn phase. The “Setup” section of an adventure lets you know the make-up of the Spawn deck. It usually depends on the number of Heroes being played and the difficulty mode chosen. On the Enemy Spawn cards, you’ll find information about the spaces that enemies spawn into, on the adventure tile (west or east), the type of enemies, their levels and their numbers. Some set up diagrams also show the locations of where mounts will appear, and sylfae via nephelith. When this happens, you will be asked to roll an adventure die, and depending on the result, a common, uncommon or rare creature will appear. The adventure booklet will provide specific details. For the first adventure, for example, horses are common, Hyattis are uncommon and Wyverns, small dragons that will try to lick you clean if you tame them (when you find one, you only dream of one thing: jumping on their back) are rare. Some cards also generate effects: enemy movements, modification of the position of the Activation cards of certain enemies etc…

With opponents popping up at the end of each turn, during the Spawn phase, and the bonus effects of group attacks, Heroes can quickly become overwhelmed if they don’t clear the board each turn. It gets tense, but saving the world is never a walk in the park! 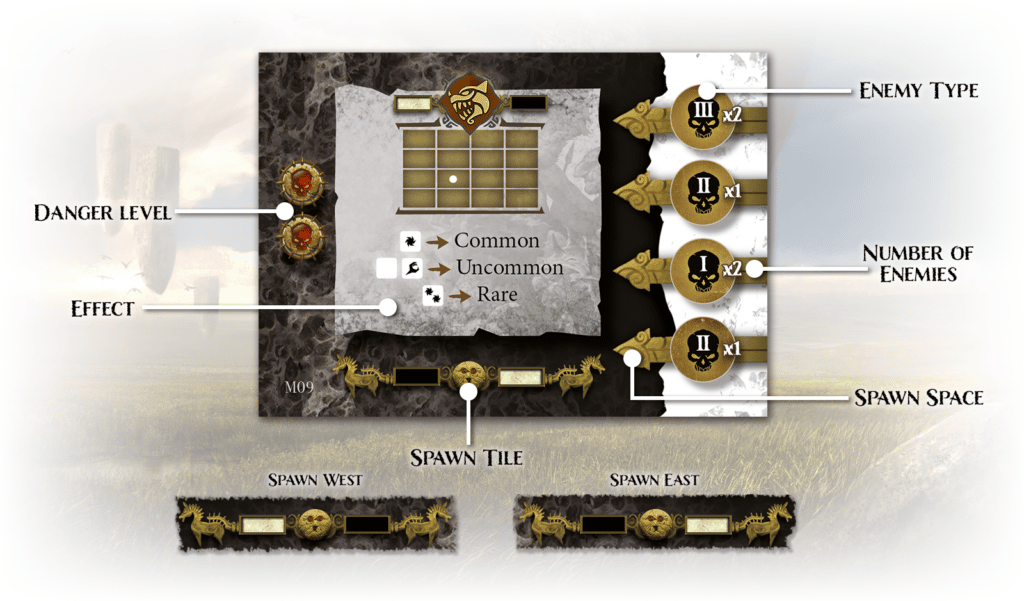 When your Hero attacks, you will allocate the power of his attack against one or more targets. It will usually be enough to allocate a number of hits equal to the enemy’s DEF value to eliminate them (Minions and Specialists only have one Health point).

Example: Konrad is fighting against four Tracker minions (DEF 1) and one Hunter (DEF 3). He rolls 4 hits. You can allocate those 4 hits to eliminate all the Trackers (DEF 1). But you can also choose to allocate 3 hits to the Hunter (DEF 3) and another one to a Tracker (DEF 1) to kill these two Kizzhuls.

You can improve the effectiveness of your Hero’s attack by taking advantage of the reinforcement bonus of one of your Tactical cards or that of an ally located in your space or in an adjacent space. Good teamwork is key to victory.

Enemy activation has been designed to keep the game turn simple. You won’t have to move twenty miniatures at once, and your Hero will only have to make one defense roll during the activation of an enemy type. In addition, the system allows players to remain active outwith their turn by reacting to attacks with Technique cards, combos, or by boosting their rolls (DEF and ART) and those of their allies. Always be on your guard as you cross the lands of Alboraan! 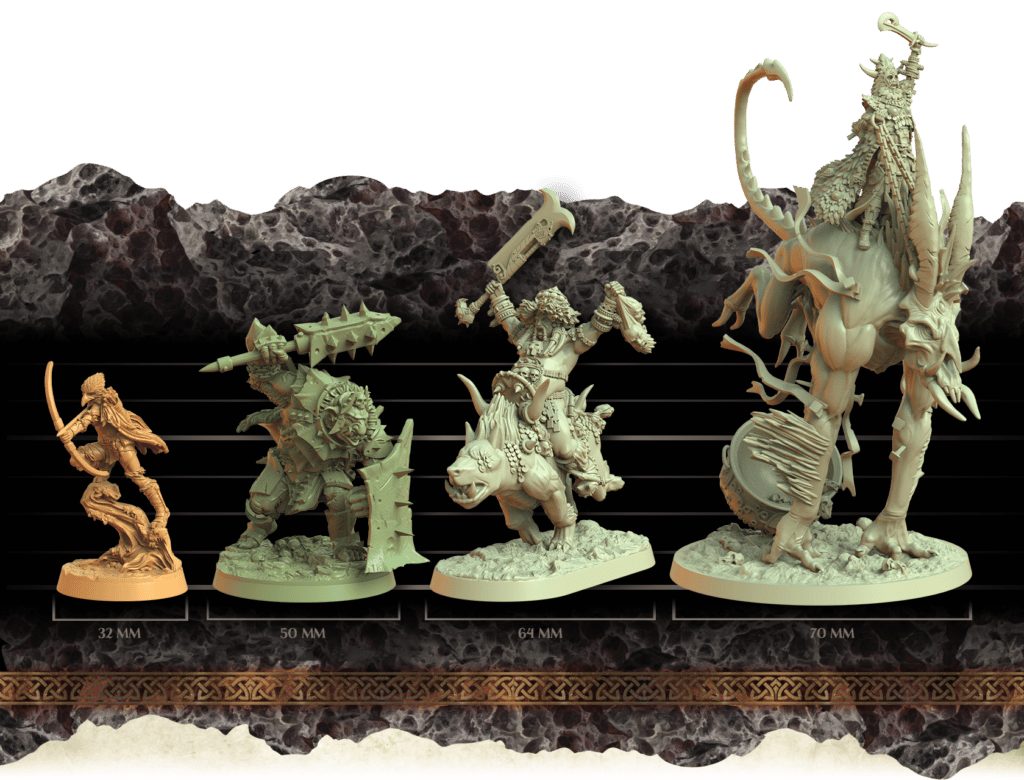 USERS WHO READ THIS NEWS POST ALSO VIEWED THESE PRODUCTS